Baskin Robbins Franchise in India: If you like ice cream and are looking for a company to invest in, you have come to the right place. There is no season for ice cream. People eat it in summers and winters alike. And when it comes to ice creams, one name that pops out is Baskin Robbins. A strong global presence is one of the major strengths of Baskin Robbins. In less than 30 years, Baskin Robbins has managed to become one of the most cherished ice cream brands in India.

It is a great idea to open a Baskin Robbins franchise in India because the Baskin Robbins products that are sold in the country are 100 percent vegetarian and made from natural ingredients. There are over 100 flavors of ice cream which can be used to cater to the different taste palettes of the customers. The company keeps on introducing a new flavor every month. The customers can also get Baskin Robbins’ ice cream via home delivery. Gift vouchers of 100, 200 and 500 rupees are also given out by the company to the customers.

Baskin Robbins is an American ice cream company with its headquarters in Canton, Massachusetts. The company runs a chain of ice cream and cake specialty shop restaurants. The company was started in 1945 by Burt Baskin and Irv Robbins in Glendale, California. As of 2013, the company has stores in 7,500 locations, 5,000 of which are outside the United States. The Baskin Robbins ice cream is sold in over 50 countries in the world including places like India, Denmark, China, Armenia, Portugal, South Africa, Saudi Arabia, South Korea, United Kingdom, Puerto Rico, Mexico, Nepal, Russia, Japan, Ireland, Egypt, etc.

The company has the slogan ’31 flavors’. The concept behind the slogan is to provide 31 different flavors of ice cream to the customers so that they can have a new flavor every day of the month without eating a single flavor twice. In 2005, the company’s logo was also changed to incorporate the number ’31’ into it.

The company was started when the two founders, Burt Baskin and Irv Robbins, decided to merge their own individual ice cream stores named ‘Burton’s Ice Cream Shop’ and ‘Snowbird Ice Cream’ respectively. Thus, the brand that is Baskin Robbins came into existence. Since its inception in 1945, the company has introduced more than 1,300 flavors of ice cream.

In India, the business model adopted by Baskin Robbins is that of franchising. The ice creams are manufactured in a plant in Pune, which is owned by the company itself. A 5-year franchise agreement is signed with the franchisee and then, the company helps the individual in helping him or her in setting up the franchise and providing other forms of assistance. 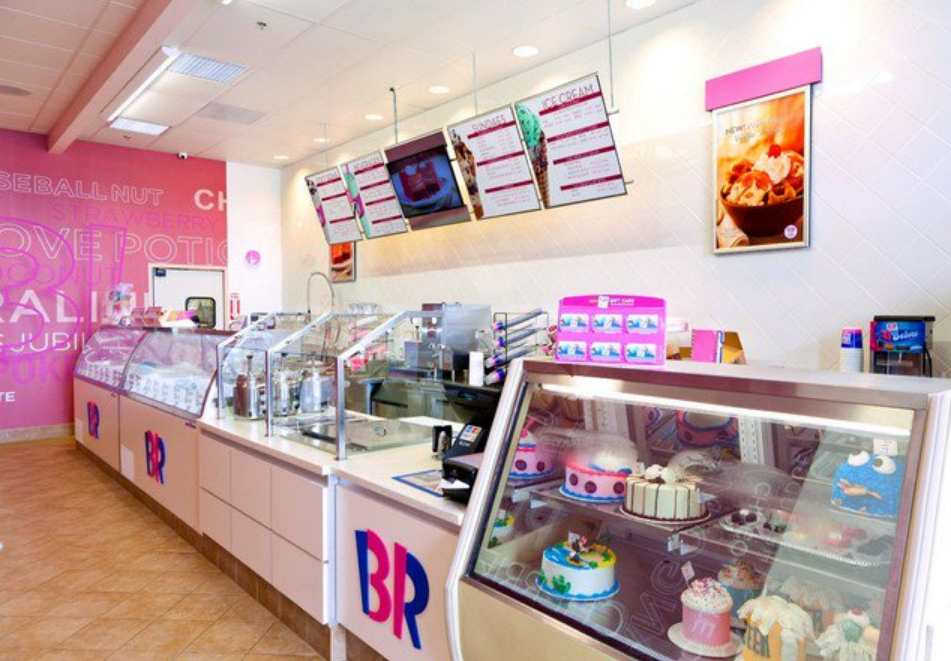 If a person is looking to invest in an ice cream company, then Baskin Robbins is as good as it gets. High returns are guaranteed with a low amount of investment. Since the first store was opened in India in 1993, the company has proven to be a success and is today considered the largest ice cream franchise in the country. Baskin Robbins assists the franchisee in a lot of ways so that the franchise can thrive and the franchisee can earn a decent living from it.

Operational simplicity, flexible real estate options, outstanding product innovations, ongoing business consultation, support in regards to opening of the store and setting up the supply chain, extraordinary training programs, support in terms of design and construction, marketing plans for the brand as well as the individual stores are some of the services that are provided by the company to the owner of the franchise.

The company also has a varied range of products in the categories of ice creams, cones, milkshakes, sundaes, etc. and manages to attract over 300 million customers every year.

Baskin Robbins looks for individuals who are enthusiastic and passionate and show a commitment to the business. Apart from these, there are also some other requirements that a candidate needs to fulfill to be eligible for a Baskin Robbins dealership.

The requirements that need to be fulfilled by an individual depend on the type of franchise he or she is interested in investing in. The types of franchises can be categorized by the different kinds of Baskin Robbins stores which are as follows:

Baskin Robbins looks for individuals who are enthusiastic and passionate and show a commitment to the business. Apart from these, there are also some other requirements that a candidate needs to fulfill to be eligible for a Baskin Robbins dealership.

The requirements that need to be fulfilled by an individual depend on the type of franchise he or she is interested in investing in.

The types of franchises can be categorized by the different kinds of Baskin Robbins stores which are as follows:

Then comes the cost of investment. A person needs to invest around 11 lakh rupees in becoming an owner of a Baskin Robbins Kiosk franchise. Out of this sum, 4 lakh rupees have to be paid as franchise fees to the company, which will include the cost of training, marketing, project consultancy and opening of the store. Apart from this, an additional 50,000 rupees are also required to be paid to the company as a refundable security deposit.

In terms of investment, it will cost an individual around 13 lakh rupees to become the owner of a Baskin Robbins Parlour franchise. Out of this, 4 lakh rupees will be paid as franchise fees. An additional amount of 50,000 rupees will also have to be paid by the franchisee as a refundable security deposit to the company.

The amount of investment that is required for a Lounge dealership comes to around 18 lakh rupees. Out of this, 4 lakh rupees will be franchise fees that an individual has to pay to the company. 50,000 rupees in the form of a refundable security deposit also have to be paid by the franchisee to the company.

So, How to get Baskin Robbins franchise in India?

If the application gets approved, then the company assists the franchisee in several ways to help him or her in setting up the franchise. Support in terms of marketing, training, distribution, business development, etc. is provided by the company not only in the initial stages but further down the line too.

Baskin Robbins intends to keep on growing at a rapid pace with no signs of slowing down. From the above-mentioned statistics about the profits and return on investment on the Baskin Robbins franchise, it becomes quite clear that Baskin Robbins is one of the best choices if a person wants to invest in an ice cream company.

You May Like: Subway Franchise India (Cost, Profit & Application Process)

1. How to get a Baskin Robbins franchise in India?

One can apply for the Baskin Robbins dealership by merely visiting the company’s website and filling out an application form applying for a dealership. The individual will have to provide personal and official information in the form.

2. How much does a Baskin Robbins franchise owner make?

Yes, the Baskin Robbins franchise is profitable. With attractive gross margins that the company has on sales and the brand value that Baskin Robbins brings, it is easy for a franchisee to earn profits.

4. What is the validity period of the Baskin Robbins franchise agreement?

The Baskin Robbins franchise agreement is valid for 5 years.

5. What is the cost of investment in a Baskin Robbins franchise?

6. What is the outlet space or area required to be eligible for a Baskin Robbins dealership?

7. What is Baskin Robbins?

Baskin Robbins is a very popular ice cream company that has stores in various cities of India.

Yes, Baskin RObbins offers three different forms of franchises to the investors. THere are:

9. Is Baskin Robbins a famous brand?

Yes, Baskin Robbins is a really well-known ice cream company in India. Every year, the company serves ice cream to more than 300 million people in the country.

10. When was Baskin Robbins started?

The first Baskin Robbins store was started in the year 1993.

So, it was all about Baskin Robbins franchise India, hope this article helps you get enough information about the same. If you have any queries, feel free to ask below.